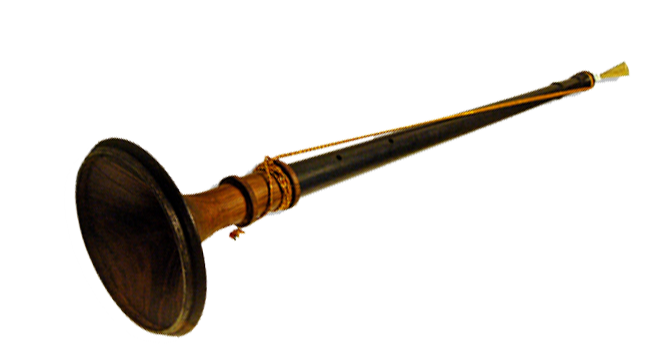 Temples have nurtured several arts forms, the important ones being music and dance. Both these formed the basic essence of the bhakti tradition. The temples in South India have been the main inspiration and source of the bhakti tradition. Thus music played a special role as a medium for prayer. Musical celebrations (Raga alapana) are very popular in Nagaswaram and this instrument acquired a special status in such presentations. Everyone in the temple precincts relished the music emanating from Nagaswaram. Thus this instrument became an integral part of temple celebrations throughout south India.

Nagaswaram is made from the wood of “Karungaali tree” (a kind of ebony). Each part of the Nagaswaram is related to a deity. The bottom circle to Surya, the Sun God, the upper hole to Goddess Sakti, the inner holes to Lord Vishnu, the body to Lord Brahma, and the seven holes to seven mothers. The Nagaswaram has seven finger-holes, and five additional holes drilled at the bottom which can be stopped with wax to modify the tone. The Nagaswaram has a range of two and a half octaves, similar to the Indian bansuri flute, which also has a similar fingering. Unlike the flute where semi and quarter tones are produced by the partial opening and closing of the finger holes, in Nagaswaram they are produced by adjusting the pressure and strength of the air-flow into the pipe.

“Seevali”- the reed is the blow piece or mouth piece, which is made out of the bottom stem of the long grass which are generally obtained near river banks. Besides spare reeds, a small ivory or horn needle is attached to the instrument, and used to clear the reed of saliva and other debris and allows free passage of air.

The instrument is usually played in pairs, and accompanied by a pair of drums called Thavil.