The brothers hail from Karavadi Village, Parakasam District, Andhra Pradesh. They belong to a great family of musicians, a family, which preserved and fostered the art of Nadhaswaram playing for the past 300 years, in Andhra Pradesh. Being blood brothers, they had the rare opportunity of getting trained in this art at a very young age, under one roof; their preceptor being their own maternal grandfather, Sangeetha Kalanidhi Dr.Sheik Chinna Moulana.

The brothers have accompanied Dr.Sheik Chinna Moulana in many of his concerts throughout the length and breadth of India and also in foreign countries. Kasim-Babu have been presenting duet Nadhaswaram concerts, since the past 15 years. Kasim-Babu visited countries like Sri Lanka, Hong Kong, Russia, Germany, France, U.A.E, Finland, Malaysia and earned accolade in their concerts. 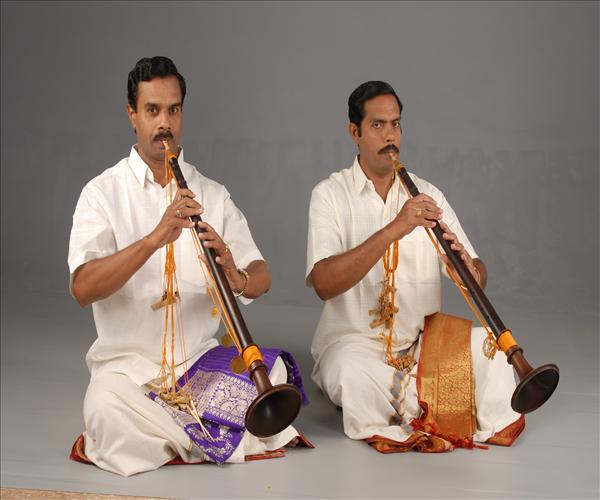 The brothers undertook a three months concert tour of US and Canada during April – June 2006. They performed the inaugural concert of the Thyagaraja Aradhana Festival at Cleveland on 15th April 2006 also in the Chicago Thyagaraja Aradhana Festival. The concerts were very well received and acclaimed by the audience and also in the media. During the tour they presented three Lecture-Demonstrations – one of which was at the Department of Music, at Jackson state University, Jackson Mississippi, which generated very lively interaction. The initial tour has resulted in sustaining requests for their performances in the subsequent years also and they have become regulars, ever since.

The brothers have accompanied their grandfather Dr.Sheik Chinna Moulana in several Audio- cassettes and CDs. They have also released their own duet audio Cassettes and CDs.

Kasim, besides his tutelage in Nadhaswaram, also took care to qualify himself academically; He is the proud product of St.Joseph’s college Tiruchirappalli, obtaining his B.Sc., (Physics) degree in the year 1982.

The brothers are running the School “Saradha Nadhaswara Sangeetha Ashram” founded by Dr.Sheik Chinna Moulana, with the main objective of imparting Nadhaswaram training to younger generation. Kasim-Babu have established a Trust in memory of their Guru and grandfather Dr.Sheik Chinna Moulana – “Dr.Chinnamoulana Memorial Trust”. The prime objective of the Trust is to globalize the importance of Nadhaswaram Music. The Trust is rendering noble service – by presenting Nadhaswaram instruments to deserving students and also purses to senior indigent artistes of the Nadhaswaram fraternity.